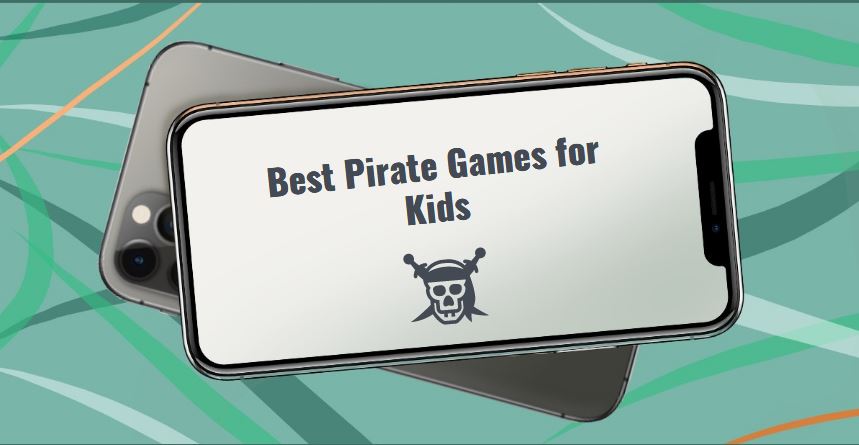 Everybody loves the story about Peter Pan. And everyone loves Capitan Hook, even though he was an antagonist, right? Or, have you seen the Pirates of the Caribbean Sea? The coolest movie! There is something appealing about pirates that no one can deny.

And, of course, kids are even more captivated by the theme of pirates. And if you think that pirates are portrayed as antagonists everywhere, you’re wrong! Nowadays, there is a lot of games on the market where pirates are kind, smart, and brave. You can explore the list down below and find a perfect game about pirates for your child yourself!

Let’s open our list with this super cute game for kids about pirates. Here the main characters are the animals, dressed up as pirates. In this game, children will have to explore the islands, solve riddles, solve crosswords, and many more.

The main task here is to find the treasures. By the way, the game even includes the element of battels – in some scenes, you will need to define the tactics of strikes. But don’t worry, there is no violence. In the main menu of the game, you can review the map of islands and choose which way you want to go this time.

Overall, the game is quite nice, however, the excessive amount of ads can quickly ruin the whole impression. It’s especially uncomfortable if you want to give it to your toddler to play.

You may also like: 11 Best Memory Card Games for Kids (Android & iOS)

The next game on our list is suitable for a little bit older kids, but it’s only because it’s more complex and much more exciting and interesting.

In fact, this is one of the most popular games even for adults. Braveland Pirates is the RPG game where you’re leading a group of pirates who are embarking on the unknown islands hoping to find the treasures which are hidden there.

However, not everything is that easy! The island is full of zombies, evil spirits, and monsters, so you will have to participate in numerous battles in order to get closer to your aim. Plan carefully, choose your strategy and don’t forget to train the leader of your crew.

The graphics are really great, they’re made in the cartoon style, but each character and location are so well-drawn, that you get the aesthetical pleasure while playing this game. The soundtrack is amazing as well.

Some battles are going to take place on the islands, some on ships – so it never gets boring! The game is recommended for kids above 8 years old. The feedback from users is all positive proving that this game is worth your attention.

In general, this game is just a slight copy of the Pirates of Caribbean Sea theme. We also need to say that this game will be suitable for kids above 12 years old. Though, we can’t say anything bad about this game – the graphics and overall gameplay are amazing.

This is an RPG strategy where it’s always up to you to decide where to move next. You can start battles with other ships for the treasures, you can choose the embarkment near the closes town, and so on. What is more, the game has a multiplayer mode and it’s an open world.

In total, the game includes more than 300 thousand players all around the world. You can always choose if you want to play in the free ride mode or in the story mode. Earn points to upgrade your ship. Fight the sea monsters that stand in your way. Or, better to say, swim?…

Once again, this game is really recommended for playing only to older kids, because missions are really difficult to pass and many users in comments complain about it.

Now let’s move on to something easy and available even for toddlers. This cute game about pirates’ adventures is a great game choice for little kids. This is an educational game, therefore, while playing, your kids will also start obtaining some basic essential skills.

There are several games that will help your child to develop the skills: matching colors game, puzzles game, blocks game, find the match, and so on. All of them are based on the pirate’s theme. And, of course, all the pirates are protagonists in Pirates Treasure Island.

You just open the game, see the main menu and choose the section with the mini-game that seems more appealing at the moment. This app doesn’t have any significant drawbacks – at least we didn’t find one.

This is an alternative to the previous game, but this time for iOS devices. It is available even for toddlers and it’s a funny and kind game.

When you just launch the app you need to create the looks for your pirate. Then, you can choose one of the many games that you want to play. They’re all quite easy and made to help a child to develop logical and cognitive abilities.

The game includes interactive scenarios, and as the child completes the tasks, he/she also watches the development of the story. Plus, here you will find the possibility to create stories yourself. You just need to use stickers to place them in the picture.

The soundtrack is amazing as well. All in all, the customization element is the main here and your kid will be fashinated by the possibility to create their own pirate.

This is one of the most popular games in this category. Even though it is made in cartoonish graphics, it’s not recommended to kids under 6. Later we explain why.

This is a multiplayer game, so you have a chance to play with all your friends! Actually, you can decide if you’re playing in coalition or you’re just going to attach each other in the battle for the gold and land!

And don’t forget to build your own fortresses on the islands. The better your island is protected, the higher the chances that your assets will stay safe and sound. And using assets, you can upgrade the weapon powers of your ships.

You can also go exploring the unknown islands with mythical creatures, overcoming different obstacles on your way. But the mode where you can play with your friends is the funniest one. The game also includes the elements of gambling.

In the comments, some users complain about bugs in the game and about the fact that the plot itself could be more exciting. Still, it is a cool game about pirates that suits all ages!

Now this game about pirates combines the elements of strategy and adventure game. You have to sail the sea and take part in the most exciting battles – with other ships, with monsters, and so on.

The feature that is completely different from other games is that here you can choose the captain of your crew and the characters are presented in all diversity of looks.

If you are looking for a more simple pirate game where you mainly have to take part in battles, then this is an excellent choice. This game is an RPG strategy where you are playing for pirates and you’re hunting for treasures on an unknown island fighting different monsters.

Thus, the idea of the game is really similar to Braveland Pirates game. The main difference is in graphics and animation. And if in the first game you have 2D graphics, here you can enjoy the full 3D mode. However, the locations could be done better and the whole look of the game is a little plain.

The user’s feedback is mainly all positive, however, almost everyone notes that the game gets boring over time. The game is available in multiplayer mode.

You may also like: 7 Best Math Word Problem Solver Apps for Android & iOS

And the last game on our list is a mix of a strategy and a pirate shooter. In case you’ve been looking for a game with more action, here it is. However, take into consideration, that the graphics arevery authentic and might seem weird to some people.

The gameplay is also controversial. It will be especially obvious in the battle mode. The positive side of the game is that it really allows you to travel among various locaitons and explain them. You will have to search for the gold, fight monsters and lead your crew.

Sea of Bandits has quite a mixed feedback from users since there is a lot of bugs in the game.