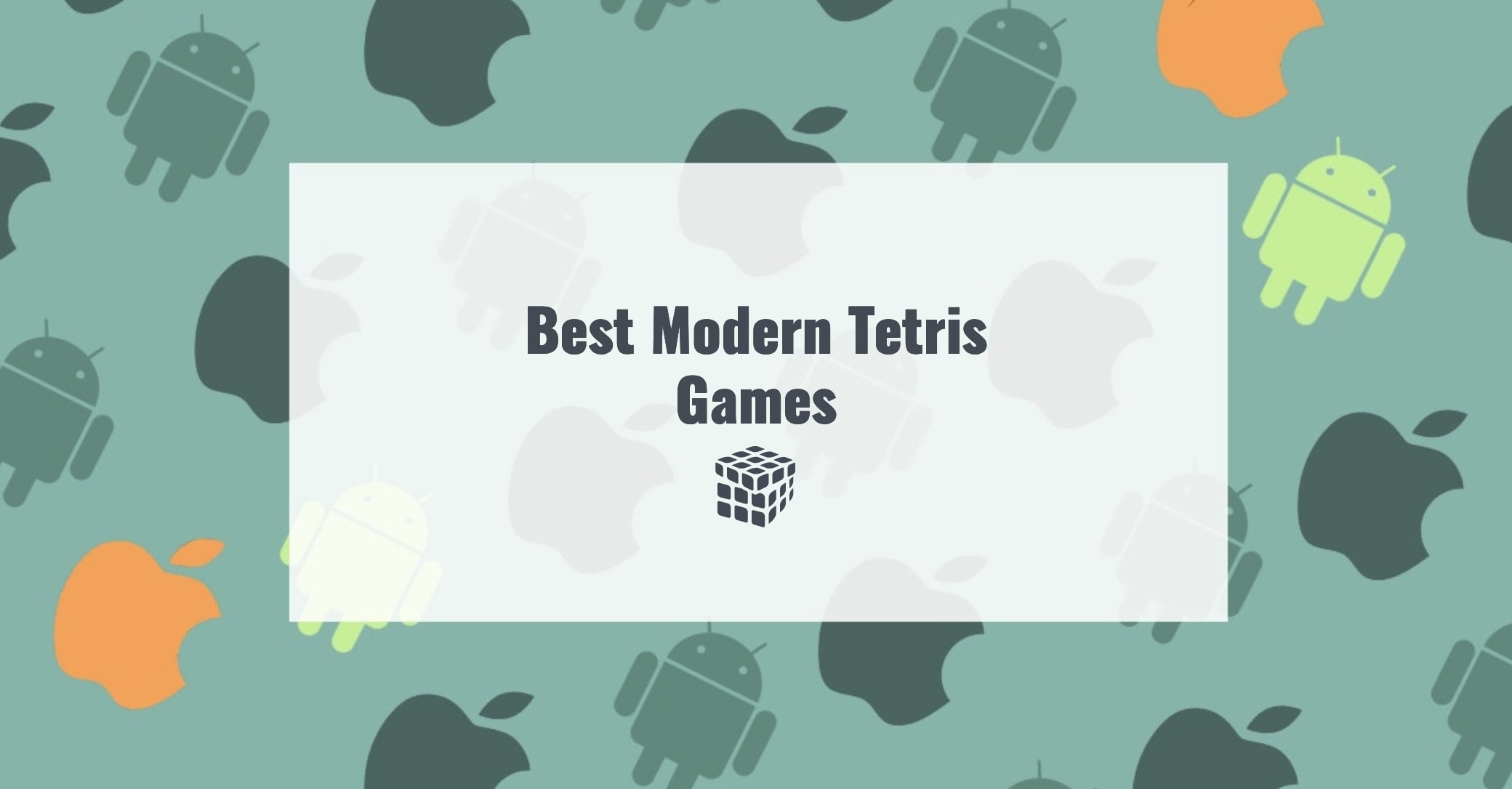 Modern games fascinate people all over the world with their variety and graphics. Yet, there are games that have remained popular for many years. One of these games is Tetris. It is played by adults and children because of the simple rules and accessibility.

There are many versions of this game for mobile platforms. If you have already enjoyed the classic version of the game and want to get it in a new form, we recommend you these best modern Tetris games for Android & iOS.

If you are a puzzle fan then we recommend you these best cube puzzle games for Android & iOS.

TetroCrate is a game that has taken several steps away from the original.

The developer has forbidden users to rotate the pieces, and second, it has removed the familiar view. Now you will have to look at the playing field from above.

For the first few minutes, these innovations are a bit confusing, but when you collect a couple of dozen levels, everything will fall into place.

As mentioned earlier, the developer has forbidden you to rotate the pieces, but you will be able to place them anywhere on the playing field.

Another new feature is the changing of the pieces. If a piece that has fallen out now doesn’t suit you, you can replace it with the next one by tapping on the image in the upper corner of the screen.

Yet, the next turn you will still need to find the “deferred” design a place on the playing field.

Despite the fact that the developer has strayed far from the original, the game is very addictive. Once you understand the rules, you can hardly tear yourself away from the game for the next few dozens of minutes.

You may also like: 9 Best Box Puzzle Game Apps for Android & iOS

Tower Blocks is like a mixture of Tetris and a game in which you have to build a skyscraper out of blocks falling from above.

In Jewel Tower, the playing field is not restricted to the sides. But while this gives you some extra opportunities, it also complicates the gameplay quite a bit.

Cause now the blocks have nothing to lean on, and they can freely “fall” over the edge of the screen.

Another new feature is that now you won’t have to draw lines. The developers have abandoned this idea. Your main task in this game will be building a big tower from Tetris blocks.

The higher will be this unusual structure, the more points you will get. At first sight, this gameplay solution looks more than strange. However, this game can captivate you for a long time.

You may want to return back to classic Tetris games one day.

There are no built-in purchases, hints, energy, timers, and other unnecessary elements. There is only a playing field of 10 by 10 cells and colored blocks, instantly resurrecting the classical Tetris.

Lines of blocks vertically and horizontally are destroyed regardless of color. The number of points earned on the selection of colors has no effect. There is no time limit in this game either.

The gameplay of this puzzle is plain. Hook the blocks that appear at the bottom and fill the screen with them, trying to think carefully about the placement of each one. Horizontal and vertical lines of blocks disappear, making room for new colored cubes.

Unlike “Tetris”, in 1010! the blocks on the playing field do not change their position. The round continues as long as there is room on the screen for the shapes made of blocks.

If there is no room, you can see the score and the place in the ranking. Of the settings available only mute and change the theme on the main screen. The game 1010! is a great time-killer that you can spend five minutes on or get stuck for hours.

Zentris is a relaxing puzzle game with a set of interesting levels and a nice design.

The game location is represented as a board divided into many cells. On the board, you need to place the blocks that appear at the bottom of the screen.

The blocks can be single and multi-layered. Your goal is to score maximum points by arranging the blocks horizontally or vertically.

Try to keep the blocks compactly arranged on the location. Don’t forget to use bonuses and other tricks you learn in the game tutorial.

The points you earn will help you move up the leaderboard and get first place.

You may also like: 15 Best Low MB Offline Games for Android

Blockudoku is a combination of Tetris and sudoku puzzles. The player is given three pieces to place on the playing field to make a 3×3 square or a line vertically or horizontally.

The next three figures are given only after you place the previous ones, you can not rotate the elements. There is no definite goal, for example, to pass the level.

Yet, the more lines or squares you collect, the more record points you earn. There are also daily tasks, the goal of which is to collect 500 points, with the pieces initially placed on the field.

You can turn the sound and vibration on or off in the settings. The game is pretty addictive and great for killing time on the road or in line.

Sigils Of Elohim is a reborn Tetris game. Initially, the playing field is divided into five or six squares, but the size of the squares will sometimes increase.

Thus, the game will become more and more complicated. A certain number of crosses, straight lines, curved sticks, and dice are available to the player.

It is necessary to put them in such a way that the result will be a picture puzzle, and in a limited space.

Management is surprised by one unique feature. Figures are dragged and dropped by swipes. Selecting the desired, move it to a chosen location. To flip it, you have to press your finger to the screen and make another swipe.

The game delights with its elaborate graphics. In these little things, you can feel the seriousness and thoroughness of her creators. They managed without noisy special effects and bright colors to convey the tactile feel of the puzzle.

You may also like: 9 Best 2 Player Pool Games for Android & iOS

99 Bricks Wizard Academy is a physics and magic puzzle game based on the famous Tetris game. Yet, little is left of the classic puzzle game – only the shapes of bricks and the mechanics of their falling.

The rules are very different here. In 99 Bricks Wizard Academy, you’ll be playing as a young and inexperienced wizard who builds towers.

The building material for him is Tetris figures, which fall from somewhere above.

The basis for the tower – a small house, too narrow to be able to put a solid structure. You can place the pieces as you want so that they do not fall down, and the structure retains its strength.

The goal is to build as high as possible towers, and you can try different strategies. For example, to quickly toss one brick on top of another, arrange the figures as widely as possible to give them stability, and so on.

The main thing – to check the center of gravity of the tower and correct any mistakes. Theoretically, the tower can be infinitely high, but no one is safe from mistakes. The game ends after three such falls. At a certain height, the tower is fixed and stops swinging.

During the game, the hero learns different magical abilities, such as destroying a misplaced block. The construction process is complicated by other magicians. The game has six locations with different foundations. Initially only one is open, the rest are unlocked after successful tasks.