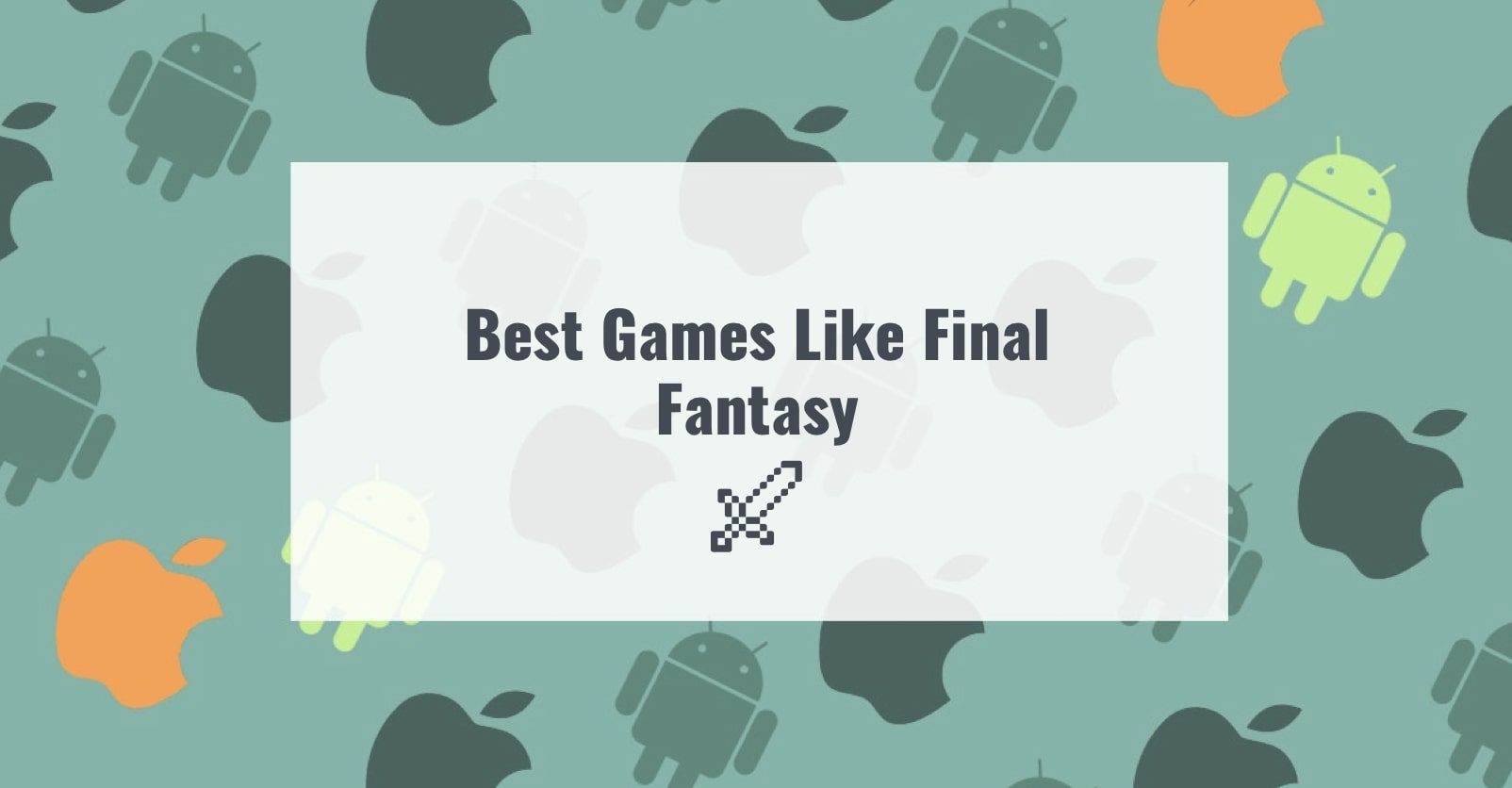 Final Fantasy is one of the best RPG franchises. Of all the games released by the franchise, there are none that are objectively bad. While the FF games are in many ways better than others in their genre, they all have their strengths as well as their weaknesses.

Putting all the merits aside, it seems that the Final Fantasy games, on a consistent basis, are overshadowed by games that are better.

The main problem with this game is that they don’t have the character adventures that fans demand.

If you’d like to play and discover brand new games that surpass Final Fantasy, check out the options we’ve compiled for you in this review of the best games like Final Fantasy for Android & iOS.

Man or Vampire is atypical of a Strategic RPG because in addition to all this it is also a Roguelike.

The whole game will consist of random elements, be it a newly generated dungeon, enemies that will behave differently from time to time, or your partners that can suddenly change their preferences in battle.

Learn new professions, share your experience with the group members and listen to their advice. You’re a human and a vampire in one.

What’s more, Man or Vampire has a unique feature – in this turn-based party game, every character can become either human or vampire at will. This will give a unique advantage and change the rules of pumping your companions.

The combat system may look elementary. But thanks to a huge number of settings and an abundance of at first glance, not obvious mechanics wanders into the fields of serious tactical role-playing. Other features include PvP and surprisingly unobtrusive donations for free mobile games.

If you like dynamic role-playing games, as a free alternative, you can try the game Eternium, made by all the rules of Final Fantasy.

The essence of the gameplay is simple. Unleash all the power of our fingers on enemies, ram them to death, pick up the loot, pump up and repeat until the final credits.

Eternium has several important advantages over its competitors in the mobile market.

First, the voice acting and quality soundtrack. The developers have approached the development of the game thoroughly. Almost all of Eternium’s phrases are voiced by professional actors.

In the background plays calming music, which is occasionally interrupted by the juicy sounds of sword strikes on enemy carcasses. This is great, especially considering the competition and the very decent visual performance of the game.

The gameplay is also excellent. Even despite the limited choice of classes from thief, mage, and warrior, the standard gameplay is sure to cause you to sleep deprivation.

If you are looking for a way to forget about the existence of the real world and a full-fledged replacement for Final Fantasy on your smartphone, then you should definitely pay attention to Titan Quest.

The developers have managed to bring to mobile platforms the game without the slightest changes, including great graphics, an abundance of loot, and leveling system.

Here you will have to develop two classes simultaneously and the opportunity to feel like a little Kratos. Organize genocide against creatures of Greek, Egyptian and Asian mythology.

The lack of Immortal Throne add-on and multiplayer mode is among the disadvantages. But in the Hack-n-Slash genre, the project has almost no equals. So if you are still looking at other analogs of Final Fantasy and avoided Titan Quest, you should try this game.

Crashlands is another hit for smartphones that we want to recommend, especially to those who are tired of the typical stories about saving the land.

In this paid game, the story is largely typical. You have the hero Flux, who, as is fitting for a loser in life, crashes on an unknown planet.

The main aim is to collect from the junk starship and fly as quickly as possible to his home planet. But the developers in almost every dialogue mock themselves, offering a kind of comedy in a sci-fi setting.

The gameplay is also top-notch. You have a compilation of elements of survival, simple action, builder, and crafting in the style of the latest masterpieces from Bethesda.

It seems simple, but the unobtrusive presentation of the story, tons of humor, creative quests and diverse gameplay pulls the game to the top.

On the fifth place of our review is Evoland or in other words the first interactive tutorial on the history of Japanese RPG.

This game is genius in many ways. Just imagine when you can pass in 5 hours a dozen different games united by the same general plot?

All the positive feedback to Evoland is well-deserved. Throughout the game, you will go the way of the Japanese role-player.

From the monochrome equivalent of Zelda straight out of the early eighties to 2D and 3D JRPGs with a strong Final Fantasy spirit.

Also, it doesn’t feel like the developers have picked up different elements from games from different eras and mixed everything up. Each era, each new element in the game logically flows from the previous one, which creates the feeling of a full-fledged, albeit weird game.

The only drawback is the short duration. But for anyone who is ready to delve into the history of JRPG, there is always Evoland 2.

The Bards Tale was one of the first major PC games imported to smartphones and another largely unique RPG. And not at all because of the gameplay.

You can start already with the main character, the bard. He does not care about saving the world, and saving another princess in another castle, too.

All he cares about is making money. But eventually, it turns out that the princess, who is also present in this game, has money. So your hero goes on an adventure and gets into incessant standup from the world of role-playing games.

The game interface is simple, with control is not difficult to master. All the virtual keys are in their places, and their location can be adjusted.

The graphics here are also really good. The textures are really high resolution so that the stony floor or a burning torch looks very nice.

Sometimes the details of your opponents suffer, and the animation is not perfect, but the scenery is good. The game has a lot of good dialogues enhanced with humor.

Also, this game has no unnecessary things like digging in your inventory and long-lasting character upgrades. Found items are automatically converted to currency and dropped into your wallet. The character is armed with the most powerful weapon available by default.

Studio miHoYo Limited has released Genshin Impact, a mass discussion catalyst for players of all ages.

The anime-styled action/RPG is ready to give you a vast world filled with elaborate landscapes. These, combined with beautiful musical accompaniment, create the impression of a living world.

Game characters, of which you will have a lot in your squad, freely move around the locations, can swim, climb rocks, and float in the air currents.

The story component takes players gradually through the world, teaches the game mechanics, and brings the combat unit to the social part of the project.

Surprisingly, the controls in the game on smartphones are extremely comfortable. Initially, it may seem that character control is done with just a few simple actions, but that won’t last long. For effective combat, you need to dodge correctly and constantly change characters.

That way you can combine attacks and elements for maximum results. There can be a maximum of four characters in a squad, switching between them is limited to a limit of two seconds.

Combat flows seamlessly into pumping, and here there’s really something to do. You have to develop your characters, raise your friendship level, pump weapons, accessories, and then various crafts. Do not waste time in vain, dive into this world right now for free.

Hardcore gamers who felt all the hardships of the original “line”, waiting for the release of your favorite MMORPG on mobile devices.

Their fantasies have come true with the release of Lineage 2: Revolution, where everyone has found something to do.

At the same time, mobile L2 opens the gates for new players, thanks to automatic farming mobs, various bonuses, and a simplified system of crafting.

Visually, Lineage 2: Revolution tries to please both loyal fans of the classic PC version and fans of modern trends in visual style at the same time.

The Unreal Engine 4 game engine allows to plunge the player into the detailed, colorful world of LA2, despite the low requirements for mobile devices.

Black Desert Mobile stands out not only for its excellent graphics but also for the rather high system requirements for your phone.

So be careful with the graphics settings. Right after the start of the game the magic begins – the stage of customization of your character.

Of course, you can choose the ready variant from the presented presets, but is it interesting?

In Black Desert Mobile a huge range of settings and different sliders are waiting for you, allowing you to create a unique appearance for every taste.

In BDM the world is open for exploration and adventure. You can do different crafts, you can pump up your hero by killing monsters. Also here you can fight with other players in PVP.

Also, pay attention to the auto mode, which in the game is called “black spirit mode”. In it, you customize the behavior of the character, and then he will do all the specified actions.

The player only has to check the character occasionally and release the bag from the various resources that have fallen out during farming.

This is a fabulous RPG project in which players must assemble a team of five heroes.

Embark on a journey through the Lands of Dawn, destroying hordes of monsters and solving the various puzzles encountered throughout the story campaign.

As the developers assure, an important feature of Mobile Legends: Adventure is the relaxing gameplay that doesn’t require much time and effort from players.

The main part of the game activities requires only a few taps from the player. Further, all the work will do automatic combat in the required speed mode.

Heroes in Mobile Legends: Adventure is divided into many types. The uniqueness of each player is achieved by the chosen combination of characters and strategies.

Also, an important part of the project is gear upgrades and emblem levels that open up new opportunities to improve your characters.

In addition to battles with artificial intelligence, you can always go to the arena and fight with a real opponent, his characters, and combat tactics.

The game is a mix of tactical strategy with role-playing elements and a visual novel.

In this game, you will have to overcome a thorny path from one point to another, along the way fighting off hostile personalities.

But not for the story fans of the series love the mobile version of Fire Emblem, and for the versatile combat system. The player’s squad consists of four characters.

Fighters are divided into 3 elements with the usual “rock, paper, scissors” balancing act. The lack of randomness has a positive effect on combat, as players can calculate their actions in advance, like in chess.

The character set includes references to Scandinavian mythology. Place names and descriptions of magical abilities include fragments in the ancient Norse language.