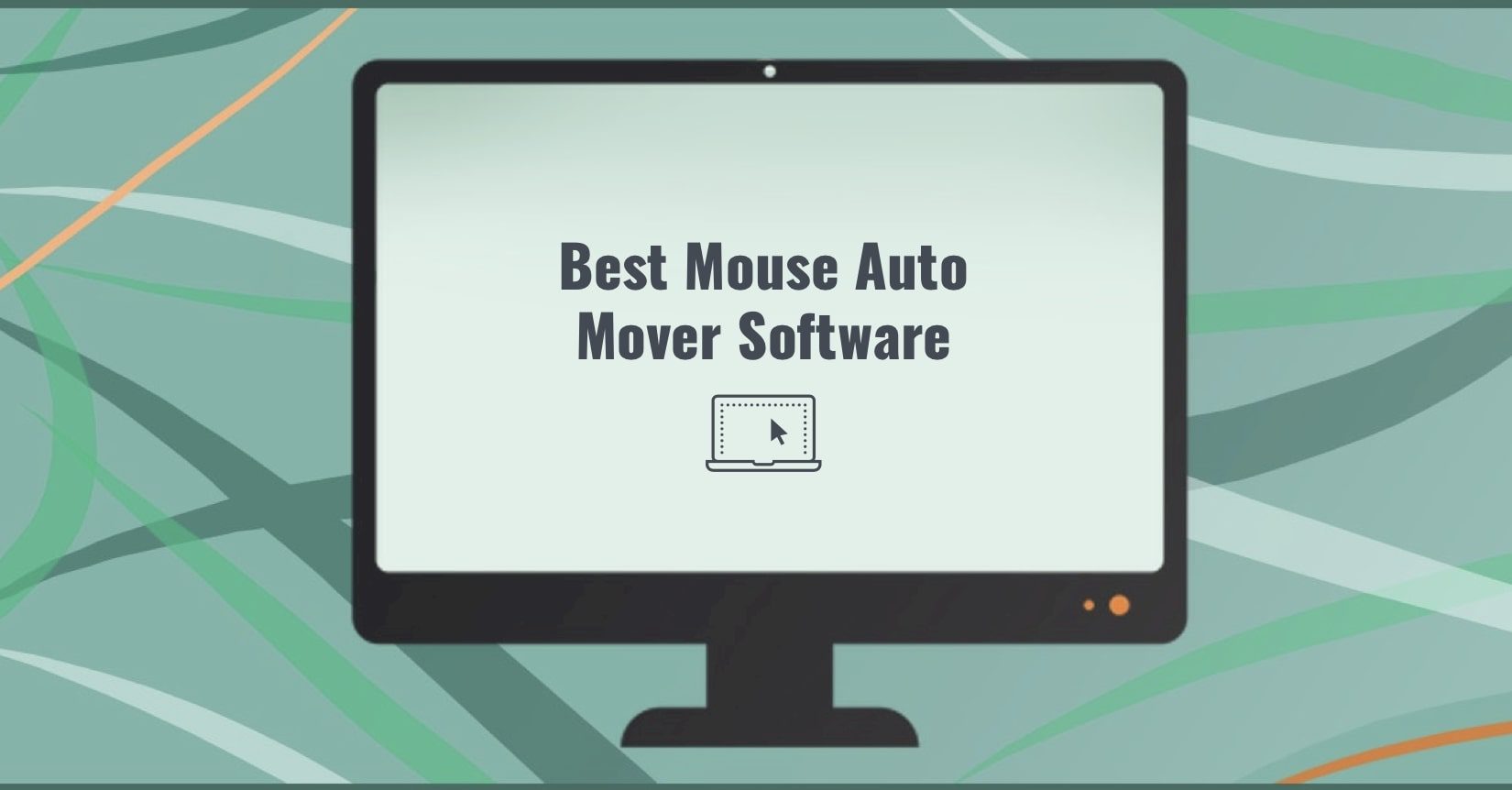 You may probably have had to deal with the unpleasant situation where Windows starts installing updates in your absence. The system may also interrupt a remote session or send your computer to hibernate mode. Thereby disrupting your workflow.

If for some reason you can’t change its behavior at the moment, the following mouse auto mover software for Windows PC can help.

If you want to not only automate the work of your computer but also make its desktop more pleasant, then try these best dynamic wallpaper apps for Windows 10.

Move Mouse is used to simulate the user’s presence at the computer by moving the mouse cursor and pressing its buttons. It can also be used to run programs, execute commands or scripts.

The utility can be activated manually or automatically, in the absence of user activity and by schedule. The same applies to the termination of specified operations.

Extra options are available for each of the program’s arsenal operations. They allow you to set the distance and direction of the mouse movement, and select the button to be pressed.

You can specify arguments for commands or hide the console window. All actions can be repeated (with a configurable pause) or executed once.

In addition to the auto stop and auto start we already mentioned, the option to automatically change the sound volume is available.

Also available are options to hide the program window from the desktop, buttons, and icons from the taskbar, thumbnails from the ALt+Tab dialog box, and header overwrite. The latter options will help hide traces of the program’s presence and use it on your computer if anyone needs it.

You can set up a schedule for activating actions with a simple scheduler, allowing you to choose the day of the week and the time to start or stop the program.

You can also do it with a more advanced option that supports Cron expressions. Move Mouse can suspend its activity by schedule, and the duration of “blackout” is also variable.

It comes free of charge. You can use Move Mouse on Windows 10 computers and tablets.

Ghost Mouse is a small utility with a “one-button” control. It doesn’t even support keyboard capture. This program tracks mouse actions on the screen after activating script recording.

When it’s ready, all you have to do is click the Play button and watch as the program automatically clicks with the mouse after a certain period of time. Everything is simple and straightforward.

This is useful software for automatic mouse movements on the screen according to a user-defined scenario.

Facilitates the implementation of processes on the PC by mechanizing the recorded actions. Also, this utility simplifies the solution of monotonous procedures. It moves the mouse cursor, opens the software, files, folders, and much more.

The principle of operation is to run a sequence of actions pre-recorded by the user, repeating any text and mouse clicks. In the settings, you can change the speed of action, activate or pause the recording, as well as apply “hotkeys”.

This program is easy to use and configure, has very productive options, and is worthy among its peers. If you want to simplify your everyday actions and monotonous tasks on your computer, we recommend Ghost Mouse.

If you need to write down a sequence of actions on your computer and play it back with a single keystroke, then use this free program TinyTask.

With its help, you can greatly speed up and simplify your computer work, if it is connected with a lot of repetitive actions of the same type.

Note that making a macro on your mouse or keyboard is not the same as making a video of the screen. There are other special programs for this purpose.

So, to begin with, let’s understand the settings in the program. You will find them under the rightmost button in the working window. In the first section of the six items, you can control the playback speed of the previously recorded macro on the computer.

Two items from the second section of the settings are responsible for the continuity of the macro playback and the number of cycles.

The third section of TinyTask settings is the most important. Here you need to change the “crazy” key combinations set by default to start the macro recording and playback.

You can replace them with a “single-button” variant for the convenience of using this tool for automating actions on your computer.

All in all, it is an excellent mouse auto mover software for PC.

With MouseRobot you can record the sequence of actions performed in the system and programs. Thus a special executable file will be formed.

In the future, you only need to run it, and all repetitive operations the computer will perform for you. This is very convenient when, for example, you need to process a large number of files at the same time.

By default, the program creates files in its own format XTSK. After all your actions are debugged and executed without errors, you can export the task to an EXE file. This allows you to run the macro on any computer without installing MouseRobot.

The program also supports automatic recording of tasks when you perform the desired actions on your computer. The application recognizes them and transforms them into chains of commands.

But, in most cases, manual correction is still required. If the utility cannot detect your action (for example, it cannot find the corresponding command in its database), the macro will not work.

The saved tasks can be launched manually or scheduled to be executed at a certain time or under certain conditions. The set of available actions is quite large and includes the following:

Besides, each command has all the necessary settings to help you more precisely set the desired action.

This program serves to simulate mouse clicks, bringing monotonous work to automatism. The tool saves effort and time when performing repetitive, boring actions. It also improves user productivity even when the user is absent.

All you have to do for the application to start working is to set up automatic mouse clicks. They will be activated without the user’s participation and will relieve the user from unnecessary work.

When you create a script, you specify different points on the screen for clicks, save the task and run it. The utility does not need to be installed and the program interface is easy to understand.

The functions of this program extend to simulating keyboard and mouse actions. The application automates the movement of the cursor according to a preset algorithm, clicking in a selected location.

It schedules scripts, automatically enters text, and edits ready-made scripts. The user only needs to program the sequence and clicks of the output and input devices into the macro.

Despite the exemption from routine keystrokes, it is worth monitoring the application to avoid crashes. The utility is “equipped” with a magnifying glass to correct cursor movement.

The application also includes a function to compile scripts into EXEs and a script scheduler. There are two versions available. The free one is limited in functionality – the script stops working after the third minute or five repetitions.

This program automates routine work. It makes it possible to replace one-type actions. Thanks to automation the user gets “freedom” from repetitive, monotonous manipulations.

The program simulates user actions, controls the mouse and keyboard, initiates startup, and more. For the software to work correctly, you need to write a script. After launching it, all that remains is to observe the work of the auto clicker.

Extra functionality is available in the application. If the user selects the scene editor option, will be able to enable syntax highlighting and insertion of commands. You will also be able to configure “hotkeys” and script language support for loops, variables, screen analysis.

Mouse Jiggler is one of the most popular software for automating tasks on your computer.

It keeps your computer from shutting down and simulates its operation as if all the tasks are performed by a real user. Basically, this program is designed to be used with the Windows 10 operating system.

It has a pretty simple interface, which is very easy to understand. Thanks to this service you will be able to relax from the monotonous activities. Especially you will like this program if such activities take most of your work.

Access to this service is absolutely free for all users who need such support. When you turn on the program, you will need to choose from two available modes.

So, there is Enable Jiggle mode and Zen Jiggle. These two modes differ in the fact that in the first one you will see the moving cursor. In the second one, the actions will be performed automatically without a visible cursor.

You may also like: 9 Best Library Management Software for Windows 10

Mini Mouse Macro is an excellent computer user simulator. The operating system with which this service works is Windows. Here all actions can be written in the form of code. And the program will do it automatically.

All recorded actions can be repeated in a circle while performing a specific task. To start recording, press the corresponding button. Then stop the recording and specify the number of circles the program should repeat.

This software records your actions in real-time. You do not even have to wait. You can assign hotkeys to start and stop loops that you can use on your computer.

This program does not require much space and is quickly installed on any computer.